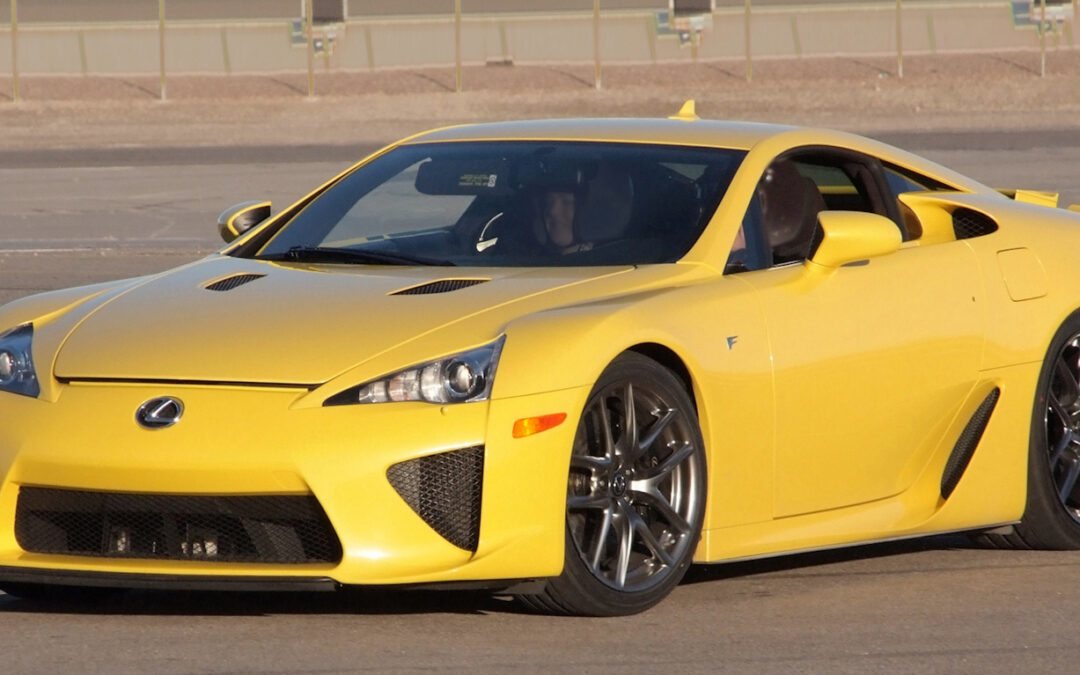 Over the years, the auto industry has increasingly honed their craft at creating environmentally sound cars and reducing unwanted noise levels for the drivers. As a result, the authentic organic engine sounds is masked more and more. For car aficionados who may buy vehicles specifically for the engine roar, this is not necessarily a good thing and they’ve made this known. The auto industry has responded by creating new technologies upon these new technologies that attempt to restore the classic engine sounds that so many have come to cherish.

The trend is succinctly described by K.C. Calwell from caranddriver.com in “Faking it Engine Sound Enhancement Explained.” Calwell references work done by Yamaha’s Center for Advanced Sound Technologies, hired by Lexus for the launch of the LFA model in 2009. Fascinatingly, the Yamaha involved here is the company that creates musical instruments – violins, guitars, etc. Lexus contracted Yamaha to specifically “utilize sound as a medium that can achieve a direct link between the driver and the vehicle” (archive.yamaha.com “Yamaha Creates Acoustic Design for Engine of the Lexus LFA Super Sports Car”). Here, sound is utilized as a concrete object, a physical means to affect the mental state of the driver – it is “sound design” in its purest form. 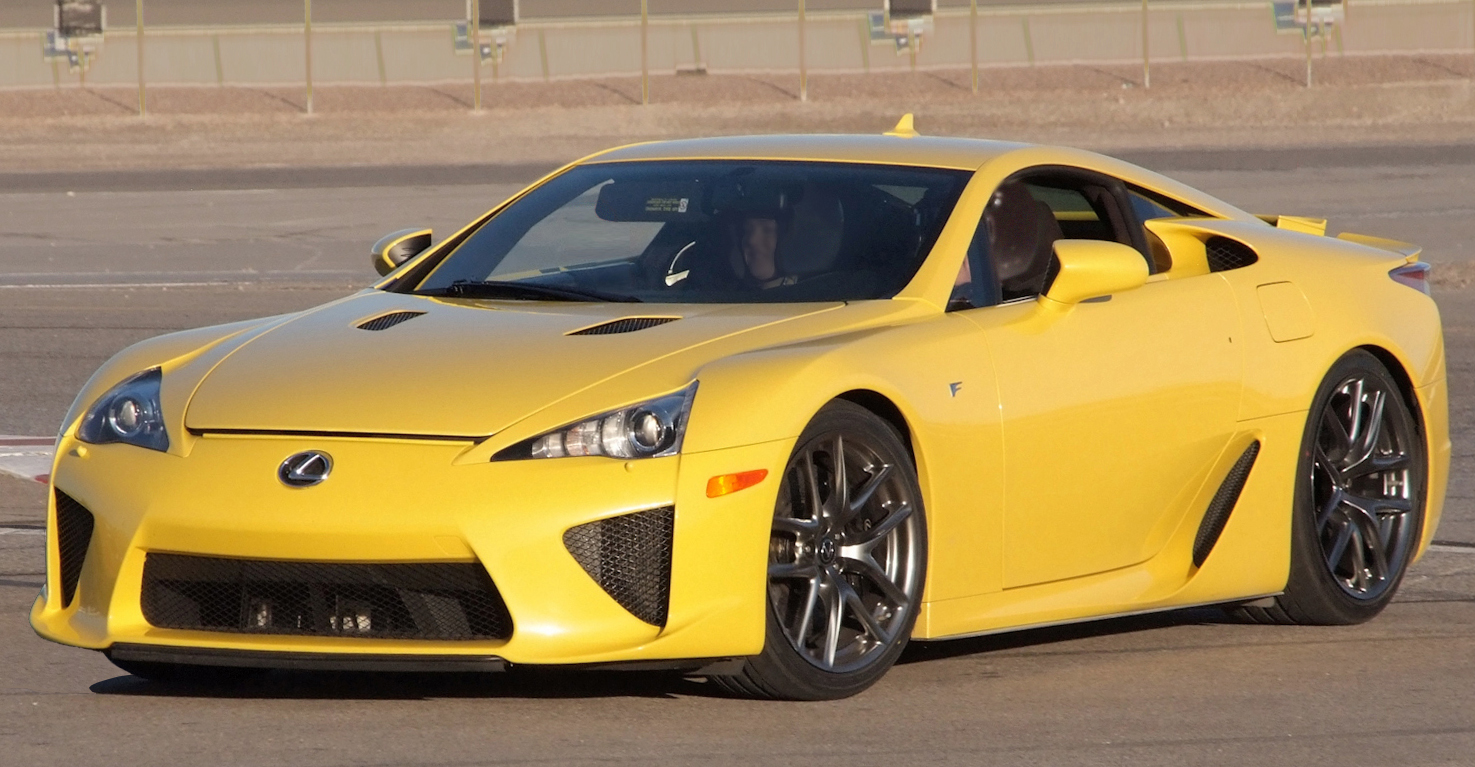 Yamaha was chosen because of their expertise in establishing a powerful emotional and performance connection between musicians and their instruments with the intent of maximum enjoyment of the musician. In this case, the vehicle is the instrument and the driver is the musician. Beyond the pleasure of driving an excellent sounding vehicle that responds to the driver’s acceleration actions, the additional sound element also adds a higher sense of control, allowing the driver to be more “in tune” with their vehicle. As Yamaha states, “Accurately passing on high-grade engine sounds to the driver makes it possible to feel the vehicle’s condition and instantly take the next minute action that is required (“Yamaha Creates Acoustic Design for Engine of the Lexus LFA Super Sports Car” archive.yamaha.com). Yamaha refers to the this back and forth interaction between the driver and vehicle through sound as “feedback,” and an “interactive loop” which makes the driving experience more pleasurable and exciting.

Calwell smartly compares the cabin of the car to the “hall” of a performance area and the driver as the “audience.” In addition to Lexus, he mentions BMW as a forerunner in the addition of recorded engine sound to the driving experience. BMW’s method is playing an exterior perspective recording of the car’s engine directly through the stereo speakers. Incredibly, the samples are chosen according to the load on the engine and the rpm in real time. As the real sounds of the engine are still somewhat audible, the additional sound through the stereo speakers is described as “backing track.”

So, here is what Volkswagen initiated in 2011. In order to beef up the sound of their engines, they created the “Soundaktor” which is German for “sound actuator” – ie something that creates sound. Essentially it is a speaker between the engine and the cabin which combines noise to the normal engine sound to create a more “authentic” old-school power sound to the driving experience. This is the definition of “active sound” in terms of automobiles – sound through the speakers triggered by real-time actions of the driver. An audio file is housed on the vehicle’s computer and triggered by changes in the throttle. All noise from the Soundaktor is played through the one dedicated speaker as opposed to other systems that play enhanced engine sound through the car’s stereo speakers. Interestingly, with a bit of digging you’ll find car enthusiasts on forums discussing the best methods with which to dismantle the function on forums – one user saying he pulled a fuse to dismantle it as soon as he bought his VW. It seems that some of these connoisseurs tend to not like the “fakeness” of the added sound, though most drivers its appears aren’t bothered enough to worry about the authenticity. A quick search for BMW Active Sound shows these videos – all providing info on how to dismantle their sound system.

Most likely, the general consumer doesn’t even realize they are listening to a replacement engine sound and simply appreciate the experience. Some users in the know, however, are wishing there could be a toggle on/off for the additional sound which would give them to choice to engage or not. As with all these systems, the purpose of the additional audio is to compensate for the muffling of the actual engine sound due to advancements in sound proofing.

The Cadillac models incorporate Bose sound systems to add additional noise-canceling technology to rid the cabin of unwanted “road noise” and simultaneously employing a stereo based system akin to Volkswagen. As an audio engineer and music producer, I 100% appreciate what these auto sound technicians are doing – they are “cleaning up” the audio of the car’s performance. It is purely analogous to the job of live sound mixers as well as those in post-production and mixing/mastering music – get rid of the unwanted noise! At the same time, they enhance the choice sounds via the stereo system.

Acura as well have moved into the foray of vehicle sound designing in an impressive way. The moniker for their efforts is Active Noise Cancellation (ANC). This is eerily similar to the theatre mixing work of blah blah discussed in a previous post. Which is creating a system that dynamically responds to sonic assaults in real time that may disrupt the performance/driving experience in order to kill the noise. Acura’s ANC works to cut out the low frequencies noises similar to cutting out the bass under 60-100dB when mixing an audio track. A bit of google digging could probably unearth the exact frequencies they are targeting – perhaps it’s 500 dB where the “mud” of an audio track tends to live at the meeting of the bass drum and the bass guitar/element. Regardless, to cut the unwanted bass out of the cabin’s aural experience Acura uses overhead mics within the cabin that create a reverse phase (noise canceling) signal to handle and mute the unwelcome deep tones. At this point, ANC is able to increase the sound levels from the engine to fill in the now clean space afforded by noise cancellation. Again, all of this is dynamic and works to raise the engine sound level within the cabin by up to 4dB. This audio system is a standard element of the MDX, RLX, TLX, and ILX models. (www.thedrive.com/tech/22834/from-acura-to-vw-bmw-to-porsche-car-companies-are-getting-sneakier-about-engine-sound-enhancement)

Incredibly, this technology has been taken to now allow cars that have 4 cylinders to sound like engines that are much much bigger, as explained in this video.

From a professional sound design perspective, being challenged with syncing dynamic engine audio samples to be triggered in real time during a live driving experience is enticing. For an audio nut, or a current student it’s kind of like “hell yeah this sounds like fun!” not to mention the earning and career potential doing sound design for car companies. This is a wide open field for sound designers. On the flip side, for the consumers and those who love these vehicles, it appears to be sort of a nightmare, as they want the “authentic.” In fact, when googling “car sound pipes” the first 5 entries and videos are all about how to dismantle them – as with the forum posts mentioned above. I include a post from Larry Webster on popularmechanics.com here because it is not only exceptionally written but quite telling. Webster, on popularmechanics.com in “The Rise of the Fake Engine Roar” laments the development of this experience that he deems “fake. First of all, the title says it all – the “Fake Engine Roar.” He references the main contributors for these “fake” sounds – muffled noise from excellent insulation and environmental regulations. He quotes car buyers who state that the industry is “lying” to them by using sound samples.

While car owners who want the classic noise might appreciate the attempt at improving the aural experience, there is some negative reaction from car lovers – from those who live by their car, and they appear to deem the auto industry’s effort to be a fake, creating a faulty experience. Whether we think the environmental benefits outweigh the opinions of these car lovers, or whether we lament the loss of the “classic engine sound,” one thing is true. That sound design and sound effects continue to play a major role in many types of products, not only on the stage, but in vehicles. The use of the sounds transforms the car itself into a performance venue.