Sound and Sculpture: Sound and Architecture

Artists draw inspiration from everything. The entire world around them and the human relationships they have are all sources of experience that provide the meaning they need to express. One powerful source of expression for the visual art is sound and music, the topic of this post. Below are some beautifully intricate creations inspired by the sonic world.

Luke Jerram is a multidisciplinary artist who creates live art projects, sculptures and installations internationally, with over 300 exhibitions worldwide in 43 countries since 1998. His work is impressive in scope and beauty. One piece, Aeolus, was inspired by acoustics and its relationship to light, architecture, and wind. As stated on his website, Jerram’s initial idea for this project was from an interaction he had with a well digger of the Qanat desert in Iran. The well digger gave accounts of the wells singing when wind passed through them. This intriguing story motivated Jerram to explore the interaction of architecture and sound.

Aeolus is a Greek God, the keeper of the winds, and King of the island of Aeolia. He gave Odysseus and his crew a favourable wind to aid in their return to their home in Ithaca and his legacy is clearly an apt name. Jerram calls Aeolus an acoustic wind pavilion. The design of this massive stringed instrument amplifies the sound of shifting wind as well as the visual aspect of the sky as it changes.  Built as a giant aeolian harp, the structure resonates on its own without additional power. According to the wind, strings attached to tubes vibrate which reverberate on skins at the top. These sound waves are sent via the tubes down to the viewers below. Aeolian harp strings are webbed throughout the structure, delicately sensitive to the wind and give an auditory interpretation of the wind in three dimensions to the viewer/listener, which Jerram writes is a “shifting wind map.” Beyond that, the tubes without strings are tuned to the aeolian scale and constantly hum even without wind.

In addition to the acoustic element, Jerram placed a great emphasis on the optical nature of Aeolus. 310 “internally polished stainless steel tubes” are placed so that the viewer can look through them, reflecting the shifting sun. This creates a continuously changing “landscape of light” as the steel tubes magnify and invert the area around the structure. The shifting skylight, acted upon by clouds and the sun, creates a dramatic picture in constant motion. The Institute of Sound and Vibration Research at the University of Southampton and The Acoustics Research Centre at the University of Salford were collaborators. 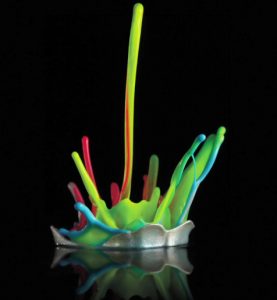 This next mention is a stunning display of sound energy turned into art. Not only inspired by sound, but created by sound, ad agency Dentsu London worked with biochemist-photographer Linden Gledhill and photography Jason Tozer to capture sound displayed in paint. Appropriately, the project was for the Canon PIXMA color printer and the results of the project unique and ultra-vibrant. The concept of placing objects on speakers has been used, through the results in this case with the addition of high speed photography, give a special view into the physics of sound. Here, paint was placed on a cover over a vibrating speaker. While the resulting paint movements were only several cm high, the high speed photography yielded gorgeous colorscapes and unique shapes in this interplay of sound and paint. 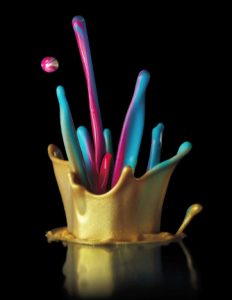 In the video “Bringing colour to life” above, Cannon Account Director Rob Zuurbier explains that the project is a celebration of color meant to highlight the “great quality of prints that the Canon Pixma produces.” The goal of the campaign was to revitalize Cannon’s image, so to speak, and this writer would say its quite successful as they were able to create other-worldly shapes using craft and
cutting-edge technology. The video shows a what appears to be a rubber membrane wrapped around a small speaker. Speakers in the video explain that photographs were taken at the incredible speed of 5,400 frames per second. A multitude of colors were used, resulting in some figures having hundreds of shades of color. The technological feat is impressive as they had less than a millimetre of depth to focus on a frame 4-5 feet in diameter.

In this demonstration of sonic sculpture, youtube user bruspup uses a speaker, a rubber hose, water, tone generating software producing a 24hz sine wave, and a 24 fps camera to send vibrations to pouring water, resulting in some surprising shapes. Brusspup secures the hose to a speaker simply with duct tape so that the speaker’s vibrations will be transferred to the hose and thus the water Next, he produces a 24Hz sine wave through the speaker and turns on the water.

Towards the end of the video, brusspup demonstrates the 25Hz forward effect and the 23Hz reverse effect, which makes the water appear as if it is either spiralling forward (downward) or in reverse (upwards) while flowing down. This visual is not a result of the sound waves passing through the water, but rather of the camera speed in relation to the Hz produced. In order to achieve the forward effect, one bumps up the Hz of the sound to 25Hz for forward and down to 23Hz for reverse as explained by Dan Nosowitz on popsci.com. All sorts of strange things happen between the interplay of the visual, time, and sound when the camera rate is changed. Sound designers certainly are familiar with the necessity of matching sample rate with video, ensuring that 48Khz audio is used for 48Khz video. Other, the sound and picture very quickly become entirely off. Either way, Brusso’s experiment and demonstration is an efficient and artful way of showing the potential between vibration and sculpture. Another intriguing element is the spiral itself. Perhaps the ratio in its spiral is the same as the mysterious Fibonacci sequence found throughout nature?

”An artist’s job is to interpret reality. Instead of using pigment on canvas, you can imagine the air is the canvas and the pigment is the sound, so you’re out there painting canvases.” – Benoit Maubery (mvtjournal.com)

Benoit Maubrey is an American electroacoustic sculptor who combines three-dimensional space with sound across a wide array of the arts including performance, sculpture, dance, sound, and the technological arts. He specializes in manifesting public sculptures, interactive in nature, that use cheap, recycled, and found electronics. The electronics are active which lend to interactivity and a performance element.

An entire book could be written on the intricacies and unique vision of his work, but the focus here is Speaker’s Wall. 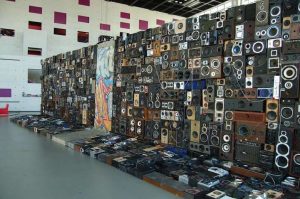 This project was inspired by an art competition in West Berlin in 1987 entitled “Overcoming the Wall by Painting the Wall.”  In the New York Times archives, an article from the Berlin Journal; In Search of a Work of Art to Overcome the Wall by Serge Schemann from 1987 describes the art movements of the time on the West Berlin side protesting the existence of the wall and totalitarianism in general. As stated by German artist Peter Unsicker, the wall is “built by Germans in the East, painted by Germans in the West.” Multitudes of artists at the time were inspired to paint and sculpt on or around the wall, mocking and heavily criticizing the Soviet Union and East 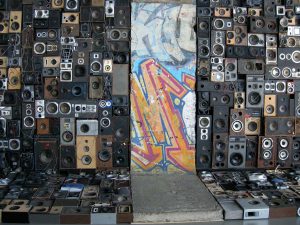 German governments. Confronted by this physical presence and the horrors it symbolized, artists mobilized for this 1987 competition and protest festival. Speaker’s Wall won second place and is now part of the permanent collection of Museum Haus at Checkpoint Charlie in Berlin, Germany. The work is an impressive combination of not only various fields of art but also the politics of the time and its significant messages of freedom vs. captivity. Maubrey’s work certainly captivates attention.

The electroacoustic sculpture uses 1000 recycled loudspeakers, amplifiers, and radios. Incredibly, callers can phone the sculpture and talk through it. During the exhibition, more than 900 calls were made. In addition, at the time it also served as a PA system.  Maubrey has a myriad of similar, but equally original, sculptures listed on his site. Another sculpture that can be physically called is the Speaker’s Monument, exhibited in 1991 in the West Berlin Exhibition, Riga, Lithuania. Maubrey recycles a trashed Stalinist sculpture “Heroes of the Working Class” into a speaker system that accepts calls. The work is covered with loudspeakers, a telephone answering machine and an amplifier. Again this artist meshes art, sound, and live political performance via the callers. 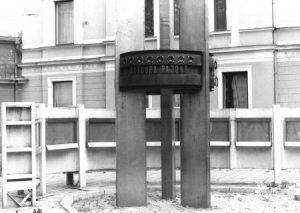 The artists above demonstrate that sound is not only a powerful medium in and of itself, but its power extends into other art forms with ease.