Get the Work Done

We’ve all been in this kind of situation before… Deadline is approaching quickly, inspiration and motivation are lacking, but procrastination is in full effect. No matter what field you work in the “wall” will rear it’s ugly head and it is essential as working professionals that we obtain the knowledge to climb over it so we can become productive once again and finish our project(s) before the deadline. Being a “victim” of procrastination in the past, I’ve spent many hours researching, thinking on my own, and talking to other professionals about how to deal with the topic and… perhaps more importantly… how to overcome it so we can Do the Work.

*While this topic is quite broad and applies to many different professions, the following strategies and tips for overcoming procrastination will be presented in a way that will be most beneficial to Composers for Media.

I. Work on Another Cue

Whether it’s boredom from working on the same piece of music for hours straight or a lack of inspiration, I can guarantee some musical cues will take longer to finish than others. When I’m stuck and dumbfounded on what to do next (Should I have the Clarinet play the melody here? Maybe I should change keys there? Etc.) I’ll save/close the session and begin to work on a new one.

I’ve found that many of us reuse motifs when scoring for a whole project and working on another piece of music (perhaps similar or very different from the other cue) can help give you ideas on how to resolve your issues with the “plagued” cue you left earlier. Maybe playing the same melody in a different time signature will spark an idea or perhaps even re-harmonizing that melody. Either way, I’ve found it’s beneficial (especially when the deadline is tight) to keep being productive, but focus your attention on a new cue if stuck on your current one. Often, this has inspired me to finish the “plagued” cue when I’ve come back to it with “fresh ears.”

II. Do Another Activity

This is the most commonly recommended tip from other composers I know. There are as many different ways to “relax” and take time away from working on the “plagued” cue as there are stars in the sky. So, I’ll just list a few of the activities that have seemed to work for other composers, but will go into detail on one of my activities and why it worked.
So, if I’m ever in a dire situation where I’ve absolutely run out of ideas (or even need to refocus) I’ll hop in the shower. If I wasn’t able to think of anything that would solve my musical dilemma while taking a shower, I’ll at least feel refreshed and energized so that I’ll be better prepared to confront/resolve the issue.

III. Step Back and Organize Your Thoughts

This is especially important if you’re writing many different cues that have to relate to each other, scoring a huge project, or are just writing a very long piece of music. In these situations (especially if you’ve already been writing recently) it’s not uncommon to just “run out of ideas.” So, what some of my colleagues and I have found to be helpful, is to stop actually writing music and take the time to figure out the “big picture.” Ask yourself many different questions (A few examples below) and write down the answers on paper so that you have a “guideline” to follow.Where/How will this start? Where will the Climax be? Will there be a Modulation, if so… where? (perhaps even as detailed as) How many bars will this section last?

If this isn’t enough, go one step further and visually represent the form of the entire song. Here is an example: 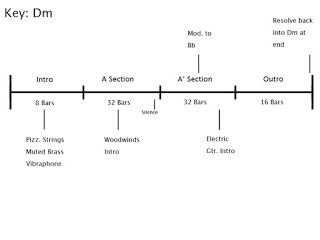 I highly recommend working in either of the previous ideas to your music creating process, even if you’re not stuck and procrastination is running rampant. This is because executing either of the suggestions (or perhaps both if you so choose) will help you focus your ideas and position yourself so that you are in the best spot possible to accurately express and compose what is needed.

It’s also very common (especially when working on larger projects) to become overwhelmed by the amount of work that needs to be completed. So much so, that you can procrastinate so much that it actually ends up putting more pressure on you than before. 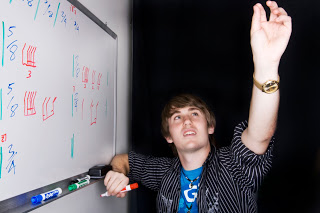 So, one of the most effective ways of combating this is by separating everything down into tiny little chunks/goals that are easy to achieve (especially when compared to the overall goal of “finishing the score”).

The overall goal of this method is to simplify your tasks and take away the stress gained from being overwhelmed by a large amount of work, so that the composition process can be allowed to flow more smoothly and thus… be more productive. Before you know it, all those tiny goals you set for yourself and accomplished will eventually result in a finished score.

Perhaps it’s just me, but when I get on a writing spree I tend to neglect a “regular/normal” eating schedule. It’s easy to think that you’re a machine and can run off of inspiration alone, but the lack of actual energy will eventually begin to deteriorate your motivation and productivity. Having a great wholesome meal can help resolve this issue.Now, I don’t mean go over to a fast food restaurant and pick up something there really quickly or even ordering a pizza (unless your deadline is very tight). I’m recommending that you set aside time to either go to a nice restaurant (perhaps your favorite place… I always justify it by saying “If I reach this goal I’ll go to this nice place to eat”) or taking the time to cook up one your favorite dishes. The extra time away from your writing desk will allow your brain to relax or at least occupy itself with something other than work. The great food will help re-energize you so that finishing that “plagued” cue is no longer an issue.

Last but certainly not least, sometimes it’s best to just finish the work. Even if you’re unhappy with where it’s going or completely lacking original ideas, the burden of “I Need to finish this now!” is lifted off of your shoulders. This in no way infers that you have to keep the music as it is in this state, as you can always come back/change it later, but by finishing whatever is troubling you the options to relax, move on, etc. are now open.Plus, you may gain some additional inspiration and most definitely a confidence boost by pushing through and finishing something that you otherwise thought was “impossible.” Furthermore, if the person paying you wants to hear a finished demo of whatever you’re composing, pushing through and “Just Finishing It” will give you that cue to send over. Who knows, perhaps this producer/director/audio lead will love the section that was giving you trouble earlier.

This concludes “Do the Work” but I hope you find these 6 procrastination pummeling strategies and tips as useful as I did (and still do!) when that ominous “wall” appears in the distance. Best of luck and keep composing fellow artists!