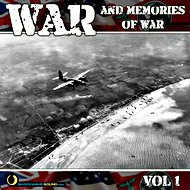 A collection of 11 compositions for use with war, warfare, world wars and armed conflict and armed struggle today and in history.

In the "War and Memories of War" series we have handpicked tracks that go well with historical types of war productions, be it realistic / historically accurate video games, historical films or documentaries, or any fiction film, game or media that requires a real wartime music score.

In these tracks the composer has generally avoided "modern" elements such as synthesizers, techno drums or other such elements that give the productions a modern day sound. Instead, the emphasis is on the symphonic orchestra, with occasional use of solo orchestral instruments, voices and more abstract sound design.

These are powerful compositions, ranging from threat/danger/malice via full-on battle and all-out war, to fragile and emotional tracks conveying some of the pain and suffering caused by armed struggle.

Some of the tracks also come with additional "seamless loops" taken from the tracks, allowing you to play these sections as a never-ending, seamlessly looping music background in things like menu systems, online applications, games and more.

The price of the music collection includes a license to use the music commercially and in public, as per our License.

Please note that the DVD-ROM is a disc for use in PC or Mac computers, with computer files on it. It is not an Audio-CD, and does not work in a stereo/hi-fi system, your car CD player etc. However, you can copy the WAV files to your hard drive, and then use those WAV files to burn an Audio-CD in your own CD/DVD-burner.

This product contains music that is PRO-registered. (What's this?)