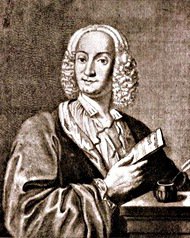 Italian violinist, priest, and composer Antonio Lucio Vivaldi was responsible for transforming Baroque music. He composed with a populist slant: his compositions were enjoyed by the elite, and the public at large as well. He explored new approaches to rhythm, harmony, and themes that departed from the established styles of the day.

Vivaldi was shepherded toward a musical career as a child. His father was a skilled violinist, and he trained his son on the instrument. Vivaldi played in the Cappella di San Marco orchestra, where his talents were widely respected.

He later became a priest. Poor health restricted him to direct orchestra at a girl’s orphanage in Venice. Vivaldi wrote most of his sacred music for this orchestra. His output was impressive, especially considering the travels and other duties required of him in this position.

He also wrote operas and oratorios. His style was unusual for the day, and at times misunderstood. Some pieces did very well, such as Farnace. The Four Seasons was remarkable for transforming visual imagery into music, a new approach at the time.

Notable works:
Concerto in A minor
Gloria in D
The Four Seasons