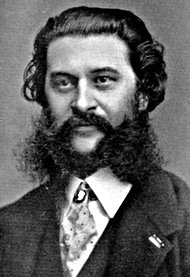 Johann Strauss, junior, is famed for his composition of waltzes and other dance music. In particular, his piece The Blue Danube secured him great fame, and continues to be one of the most recognizable pieces of music today.

Strauss was the son of Johann Strauss, senior, himself a composer of waltzes. Strauss junior displayed considerable talent as a violinist as a child. His father was adamant that his son become a banker. Strauss junior, however, learned music in private, and when he was 17, began performing himself. This brought the Strausses in competition with each other.

After Strauss senior died, Strauss adopted his father’s band and contracts. His reputation soared. He conducted and also composed during this time, and, with gentle urging from his wife, began exploring operettas. Some of his greatest works originated from this time, including Die Fledermaus, in 1871.

He toured widely across Europe, and also America. His waltzes were remarkably popular in his day, and he was deeply admired by fellow composers, such as Offenbach, and Brahms.