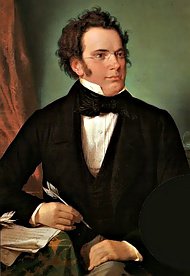 Franz Peter Schubert’s work, while not particularly valued during his lifetime, has since been recognized as a master of the Romantic era. His writing was respected for its glowing melodies and harmonies, both of which Schubert employed with mastery in multiple classical music genres.

His first exposure to music came at home, then later studied singing at the Convict court, where he also tried composing. His talents were recognized as formidable, however, his voice broke, halting his career. He taught as a schoolteacher (which he despised) while composing at night. He eventually abandoned his job to teach music privately. He wrote and self published but saw little success.

Slowly his pieces were featured in opera houses, and received enthusiastically. He continued to struggle, however, and his health suffered. He died in 1828.