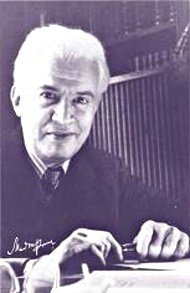 Manuel Ponce was a Mexican composer who drew on his native folklore for his works. His oeuvre is notable for its sharp change in style midway through his career. While his pieces remain popular in Latin America, few are performed widely elsewhere, with the exception of Estrellita.

Ponce had no early formal musical education. He learned piano at a young age, and later became an assistant organist in Aguascalientes. Later he moved to Mexico City and received formal piano training. Thereafter he found work in multiple musical disciplines: as critic, teacher, and organist, before departing Mexico for Europe. He studied and performed in Germany, and returned to Mexico to accept a position of musical director at the National Conservatory of Music in Mexico City. He also held a post as conductor of the Mexican National Symphony for two years.

He returned to Europe in 1925, lived in France, and expanding his studies under Paul Dukas. It was this association that was to have a profound affect on Ponce’s work. He abandoned his formal light, romantic writing and his style became more elaborate, carefully constructed, and earnest.

Ponce’s work is memorable for its beautiful melodies, which showed itself in multiple genres: chamber works, orchestral pieces, piano pieces, as well as his famous folk works.