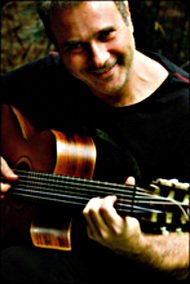 Guitarist and composer Pablo Green (real name Pablo Ernesto Grinsztajn) has been performed and composing for more than 15 years.

Originally from Buenos Aires, Argentina, Pablo has been touring as a guitar player over USA, France, England, Singapore and in several Latin American countries.

He has participated in the play-musical "Incursión Tema Fausto" presented at the Experimental Center of the Teatro Colon (Buenos Aires), The Kitchen (New York City), and the Summer school of Dartington (England).

As an explorer of new sounds, you can recognize his particular sound through his 7 strings acoustic nylon guitar.