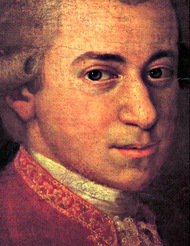 No composer is as well known, or as well loved, as Wolfgang Amadeus Mozart. Mozart lived a colourful, yet short life, producing works that would be cherished in all of classical music’s offerings.

Mozart was discovered as a child prodigy by age three, when he began playing the clavichord. At four he composed small pieces. His parents took advantage of his skill and presented him throughout Europe. Mozart was known for his instant and thorough understanding of compositions, and was able to transcribe entire pieces having only heard them just once. Other stories describe his ability to improvise, read music, or perform instruments at high mastery with no prior experience.

Mozart was appointed Konzertmeister at the Slazburg Court. He composed prolifically, writing concertos, masses, chamber pieces, and symphonies. His operas were celebrated for their beauty, charm, and mastery.

Tension at the court forced Mozart to leave, and he settled in Vienna composing on commission. He wrote sonatas and quartets, and performed as a soloist. Most of his commissions, however, were for operas, and the majority became masterpieces of the form: Le nozze di Figaro, Don Giovanni, and Die Zauberflote. He became wealthy, but lived extravagantly, and saved little. He constantly struggled with finances, and died in 1791.