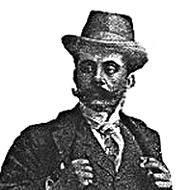 Italian composer Vittorio Monti was born in Naples. He enrolled at the Conservatorio di San Pietro a Majella, where he learned composition, and also studied violin, and mandolin.

Later he was hired as conductor for Paris’s Lamoureux Orchestra, an outfit that held weekly concerts that were influential upon French musical society.

He focused on writing ballets and operettas at this time. His love of the mandolin compelled him to write a book for the instrument, Petite Méthode pour Mandoline.

In addition to his employment as a composer and conductor, he also took a turn as a film composer. He died in 1922.