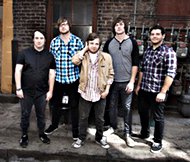 Created in May of 2007, Lights Out Dancing is a Pop Rock n’ Power Roll group out of Minneapolis, Minnesota. The newly formed band knew they were ready to make their music their life. In August of 2007 the band independently released their first record; a five song EP entitled “Oh, the Places You’ll Go”. The album was recorded with help of producer Jordan Schmidt and mastered at Sterling Sound in New York. After heavy independent touring, and promotion such as following the Vans Warped Tour, the record became a great success, selling over 17,000 copies.

In August 2009 the band teamed up with Rob Freeman to create their second album. Following the release of the new record “Ever the Optimist” Lights Out Dancing received features from purevolume.com and both Alternative Press and Substream Magazines. The band was also chosen in the top 20 unsigned bands of 2009 by Myspace.com and in the top 10 by purevolume.com.

In late 2010, in reaction to the bands success and constant touring, they parted ways with one of their guitarists and Lights Out Dancing was forced to undergo a member change. As a result, local guitar player Mark Boe was added to the lineup, bringing his own edge to their rhythmic style. Having prior musical background and tour
experience, he was more than eager to join in and bring his unique abilities and markets to the table.

Noted for a highly energetic and entertaining live show, Lights Out Dancing is making a name for themselves around the country with their heavy touring schedule. They are a lighthearted band always looking for a good time that can still take their art seriously. As a result they are constantly finding new ways to keep their music and band fresh and inspiring. Guitarist Mike Haase sums it up by saying "We are five best friends who love what we do and always do our best at it. It’s like we always say ‘We take having fun way too seriously.’"

[Please note: This artist does not want their music to be used in Adult films or any other Adult content].