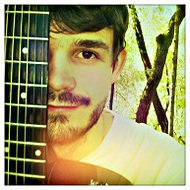 Based in California, Isha Erskine is a Multi-Platinum Music Producer, Engineer, and Composer who has worked with Maroon 5, Ziggy Marley, Black Eyed Peas, Jeff Beck, Wyclef Jean, and many other artists. Usually credited as an Engineer or Producer, he has also been involved with the composition elements on many albums over the past 10 years. Isha's influences range from Rock and Electronic music to film music. After winning a Grammy for Ziggy Marleys "Fly Rasta", Isha is now working on his own compositions.