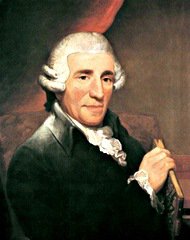 Franz Joseph Haydn March 31, 1732 – May 31, 1809 Franz Joseph Haydn’s impact on classical music was immeasurable. He was responsible for not only pioneering many new classical styles, but of mastering them as well. He invented the sonata, string quartet, and the symphony. Haydn was born in Austria. He was a choirboy in Vienna until his voice broke, and then supported himself writing compositions for aristocrats as a teenager. It wasn’t long before fame began to pursue him. He was hired by Count Morzin as Kapellmeister. Later, when the Count’s fortunes diminished, Haydn was employed by the Esterházy family, a post in which he remained for the next 30 years. Haydn visited London for extended periods, where he was a huge success. He wrote pieces such as the London Symphonies there before returning to Vienna, where he remained until he died. The significance of Haydn’s work cannot be overstated. He produced an immense amount of work, in which he contributed the storm and stress style, humor, as well as entirely new structures to classical music composition. Notable works: Trumpet Concerto in E-flat String Quartet in C Symphonies #83, #92, #101