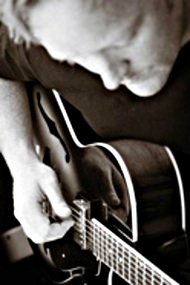 James Davis moved to Nashville in 1986 to attend Belmont University as a commercial music major studying Jazz and guitar. After graduating, James went to work as a show band guitarist for Royal Caribbean. After 6 months of cruising the ocean playing jazz he moved back to Nashville where he met Cedric & Victor Caldwell who produced Cece Winans, Take 6, Whitney Houston and Brandy among others. Through their connection, James was enlisted as lead guitarist on CeCe Winan's first solo tour. Her album, "Alone in His Presence" would eventually be certified platinum and would win CeCe a Grammy. After touring with CeCe for 2 years, James Davis continued to tour with other artists from the Nashville area. Eventually he cut down on his touring and began to focus on writing and recording his own material. He is currently recording instrumental and vocal tracks for film, television and advertising, doing online session work and producing independent recording artists.