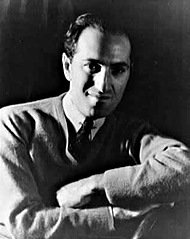 George Gershwin
September 26, 1898 – July 11, 1937
George Gershwin holds an interesting place in classical music history. He bridged the genres of popular music and concert music. Because of this, Gershwin’s status as an important classical composer is continually debated, even if the appeal of his writing is not.

Gershwin began his musical explorations at the seat of his brother Ira’s piano. His parents believed Ira, who was to be the lyricist in the future songwriting duo, would gravitate toward the piano, however it was George that taught himself to play, only by ear. He progressed through a number of teachers before meeting his mentor, Charles Hambitzer, who had a lifelong impact on his writing.

It was in 1918 that Gershwin’s talents were recognized with his hit song Swanee. Thereafter Ira and George worked together to produce musicals, folk operas, and popular songs. Gershwin continued to write, eventually landing a job at RKO film studio in Hollywood.