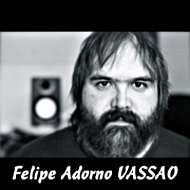 Felipe Adorno Vassao is a composer, performer and producer working out of his professional studio setup in São Paulo, Brazil. He produces tracks exclusively for the Lynne Publishing / Shockwave-Sound.com music library, he is a multi instrumentalist and even a vocalist on occasion - and he likes to cover a variety of styles and genres.

At the time of writing, Felipe's latest major work was as a composer and producer on the Brazilian rapper Emicida's latest album "O Glorioso Retorno de Quem Nunca Esteve Aqui", which was awarded Album of the Year by several music critics.

Said Felipe: "Working with advertising music since early 90s I've honed my skills in a variety of genres. And writing production music has become a "playground" in which I can experiment, have fun and challenge myself in telling a different story each time."