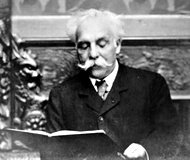 Gabriel Urbain Faure May 12, 1845 – November 4, 1924 Gabriel Urbain Fauré was a French composer. He is known for his unconventional compositions, and for being the head of the influential Paris Conservatoire, where he introduced many changes during his time. Fauré’s introduction to music began at a young age. He would often play the harmonium in a chapel next to a school where his father was headmaster. Recognizing his talent, the young Fauré was sent to the École Niedermeyer in Paris. He remained there for 11 years, absorbing music in such disciplines as organ, piano, church music, as well as harmony, counterpoint, and literature. One of his influential teachers was the composer Saint-Saens. Following this, Fauré worked in a number of organist positions, and taught. He continued to compose during this time, injecting complex harmonies and altered scales into his work, a style for which he is now known. He was appointed head of the Paris Conservatoire, and it was from this recognition that his works gained popular attention. He continued to write, and his works became svelte and sophisticated. While his repertoire is comparatively small, his unique, dramatic style had an immense effect upon other composers of the time. Notable works: Requiem Masques et Bergamasques Pelléas et Mélisande Clair de lune