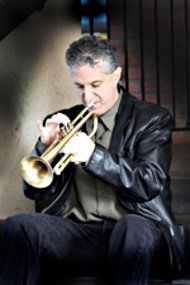 Eric Bolvin is a Producer, Composer and performer whose schedule includes recording, writing, teaching, and performing music. As a session player and arranger, Eric has recorded over 70 CDs for A&M Records, Mesa/Blue Moon Records and a host of independants. He has performed or recorded alongside such greats as Russell Ferrante, Jeff Lorber, Dennis Chambers and Greg Adams. As a composer and arranger, his works have been performed by Ernie Watts, Grant Geissman, Jerry Bergonzi and many others.

Eric's most recent cd "No Boundaries" is on Innervision records and has stayed on the jazz radio charts for over six months. Eric Bolvin has also released four solo CDs on his EBjazz Records label; Eric Bolvin's Quorum, The Night, The Rain And You, The Lost Recordings, and Workin It. His music is in use by some of the industry's top music libraries.

Eric owns his own publishing company, Faded Duck Music, which currently publishes his books and compositions. Eric is the author of The Really Big Student Songbook, The Arban Manual, The Modern Jazz Trumpet Method, The Big Book Of Pentatonics & Fourths and Tongue Level & Air-26 Lessons to Efficient Trumpet Playing.