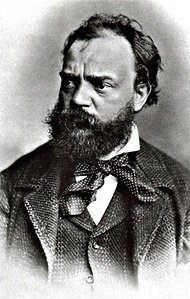 Antonin Leopold Dvorak September 8, 1841 – May 1, 1904 Antonin Leopold Dvorak was born in a small town north of Prague. As a boy he sang at the local church, but his formal training did not occur until 12, when he studied viola, piano, and organ, as well as harmony. Later, at 16, Dvorak studied organ in Prague. He became a player first in a band, then the Czech National Opera Orchestra. During this time he began composing, but was reluctant to publish. It was only when Dvorak left the orchestra to become a church organist that he began to compose in earnest. Recognition followed. He received prizes, contracts with publishers, and performances of his music across Europe. He visited London, and Russia, and eventually became the director of the National Conservatory of Music of America in New York City. He stayed there for three years before returning to Prague. He became the director of the Prague Conservatory, which he held until death. Dvorak’s works are known for their nationalistic slant. They incorporate folk aspects into classical styles, both in instrumentation and theme. His pieces are distinguished by their diversity, as well as memorable, colourful melodies. Notable works: Symphony No.9 Cell Concerto in B minor American Quintet Dumky Trio New World Symphony Slavonic Dances Rusalka