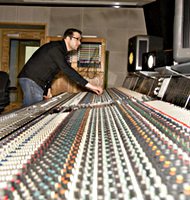 Dave Tough is a Nashville-based producer, engineer, songwriter and music industry educator. He has written and produced several songs for major motion pictures and television. Most recently in 2012 he had 9 placements in the television show "Hart of Dixie" and had over 10 placements in the CW television series "Remodeled". In 2011, his song "Falling" was featured in Seth Rogen's "Observe and Report" . Other songs have been featured in training films and commercials, including a Pantene shampoo ad series.

Dave has had cuts with several independent and label country and pop artists (and is an active voting member of the The Recording Academy (Grammy Awards). He is a member of the duo "Xavier & Ophelia" with co-creator DeAnna Moore.

As a songwriter Dave has been a top finalist in many songwriting contests and he won the Grand Prize Country Category in the 2009 John Lennon Songwriting Contest.
As an engineer and producer, Dave has produced, engineered demos and master recordings for hundreds of artists worldwide over the internet.

Dr. Tough is an audio professor at Belmont University in Nashville, TN teaching audio recording and studio production. He has worked and studied under engineering names such as Bruce Swedien and Neil Citron. He has worked on the business side of the industry for Capitol Records, Warner Chappell Music, BMG Music Publishing and Capitol/EMI.
As an solo artist, Tough has released two solo albums Gravity Always Wins (2005) and I'm Right Here (1999). Tough has been recording and songwriting educator at UCLA, Cal Poly University, the University of North Alabama and most recently, Belmont University's Mike Curb College.

Dave Tough shares his namesake with the famous jazz drummer (Tough's great uncle) who played with the likes of Woody Herman, Benny Goodman and Tommy Dorsey.

Said Dave: "I enjoy making a living making music as there is something always new to learn. If you know one instrument, you can learn another. If you know how to engineer one style, you can always learn another. My main question I ask myself when writing and making music is "what gives you goosebumps". The mechanics of songwriting and engineering can get quite technical, however at the end of the day its what makes you feel something."