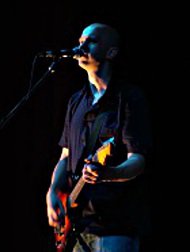 Dave Blomberg is a guitarist and songwriter based in the South West of England and has worked as a session guitarist for many years in both the UK and the USA.

In 1993 Dave joined Bradford based band New Model Army. During more than 12 years with the band, he played all over the world including many tours or Europe, USA and Canada, BBC Radio 1 and Radio 5 sessions, TV appearances and numerous festivals including the Glastonbury Festival.

Dave writes different styles of music that are often based around guitar riffs and melodies.