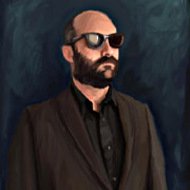 Los Angeles composer Brian David Watson's work has been praised for its unique and eclectic style. After leading and writing for a 20 piece Jazz/Classical orchestra called "the Watts Ensemble," he turned his attention to writing music for Film and TV. Brian's music has been featured on over 130 shows including The Bachelor, Duck Dynasty, Catfish, Total Divas, and more. Influenced by everyone from Iggy Pop to Charles Mingus to Igor Stravinsky, he can write in a plethora of styles including Rock, Jazz, Classical, and everything in between.