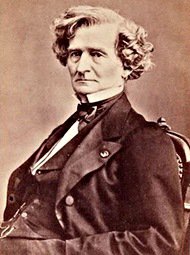 French conductor and critic Louis Hector Berlioz was not a natural child prodigy, unlike other composers of his time. Instead, he began studying music comparatively late, at age 12. Under his father’s guidance, Berlioz learned guitar, flageolet, and flute. This, as well as musical textbooks, were his only education. He never attended school for music composition.

He did, however, visit the Paris Conservatoire library often, copying scores there. Inspired by this, and other operas of the time, he abandoned his medical studies and began composing independently. Berlioz adopted a pattern of writing reviews, composing, and organizing concerts.

His compositions featured massive, 1000-piece orchestras that highlighted emotive, emotional passages drawn from the upheaval in his personal life. Berlioz was inspired by prominent works surrounding him during the French Romantic movement, such as literature from friends such as Alexandre Dumas, Victor Hugo, and Honore de Balzac.

His eventual success brought him the ability to compose freely, critique, and conduct in Italy, Russia, and Germany. He died in Paris in 1869.