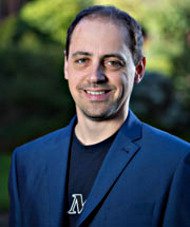 Allister was born of the world of video games and has one of the largest portfolio's in gaming history with over 400 titles to his name.

Past works include big hits such as "Roller Coaster Tycoon" for the PC and "Driver" on the Playstation as well as more recent games such as "Moshi Monsters" & "Hasbro Arcade." Recently he was also asked to create the music for a theme park in Abu Dhabi. Allister`s experience in game music has led him to master many musical styles and he particularly enjoys blending realistic instruments with modern synthesis. Influences include the electronic composer Jean Michel Jarre and more recently Hans Zimmer. With a huge array of sound libraries at his disposal as well as access to live performers Allister can turn his hand to any style and is available for commissions at any time either for film, television or video games.