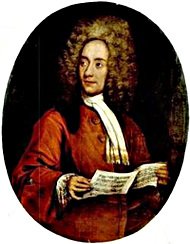 Italian composer Tomaso Albinoni originally began composing on a whim, writing more for pleasure than as a career path. He showed talent as a singer at an early age, however his skill as a violinist proved stronger. These explorations led him to dallying in composition.

His father’s death allowed Albinoni to escape the chains of the family’s successful, yet uneventful paper business and adopt the life of a career musician. His approach to composition differed from others of the time. Instead of working at a court or church, Albinoni choose to work independently instead.

Albinoni was quite prolific. He wrote over eighty operas, some of which were produced in his hometown of Venice. He is better known for his instrumental music. His oboe concertos in particular are of note: they were the first recorded use of a solo oboe by an Italian composer.

These works drew the interest of Johann Sebastian Bach, who composed fugues based on Albinoni’s work.

Much of Albinoni’s work was destroyed during World War II during the destruction of the Dresden State Library.