Things to Consider When Scoring for Games, part 3 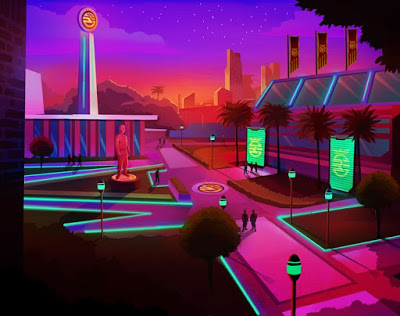 Hello Again! It’s been a little while since I’ve written one of these articles, but I just finished scoring a new game and learned quite a bit from the experience that many fellow Game Composers may find useful. The game is called “Cities of Legend” and it’s a Social Game for Facebook based off the New York Times bestseller, “Legend” by Author Marie Lu (Developed by Wicked Sweet Games & Published by CBS Films). I’ve worked on Flash games for Facebook before, but have never had the opportunity of creating the “Audio World” for an established IP. That in and of itself was quite a fun challenge, but I also learned a few other things I’d like to share on what a Composer should keep in mind when scoring for games.

This is the third article in this series and the first subject of each one has been about Platform Constraints. It is so tightly knit to video games and the direct performance of your music system, that I’m fully expecting to learn something new on each project (especially considering there are so many platforms to create games for!). “Cities of Legend” is a flash game for Facebook, so I’d like to talk a little bit about some of the constraints we had to work around.

First and foremost, people expect the loading times for their Facebook games to be minimal. The longer it takes your game to load, the higher the probability of the player just closing the window and ignoring your game altogether. This expectation directly limits the amount of music (and quality at which it’s being played back at) you can have in your game. For “Cities of Legend” we decided on three Sixty (60) second loops for: The Rebels Home, The Republic Home, and Combat/Mini-Game.

Another factor that limited us to three music tracks was Flash’s inability to create a basic interactive music system. Rather than spending our time trying to force the engine into something it’s not familiar with, we decided to invest our time into reinforcing the most important moments in the game with strong, thematic music that can easily loop.

My friend and talented Composer, Gerard Marino, shared his way of thinking about music loops with me a while ago. I’m going to paraphrase a bit here, but he basically said, “If you only have a minute of music to work with and that minute is going to be looped over and over again, put so much detail and interest in that single minute that the player can hear something new each time it repeats.” 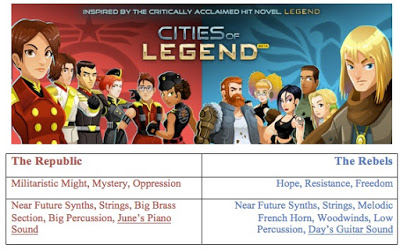 I directly applied this concept to the music of “Cities of Legend” and ultimately it does a better job of reinforcing the game world than a few ambient loops would. It may be harder to pick out the looping point for Ambient tracks, but we felt that approach wouldn’t be appropriate for a game of this size. The whole game flow is very fast and Ambient tracks (in that short of a time frame) have nothing to add or say to the game. Which conveniently moves us to the next subject…

II. Get to the Point

Not all games feature a twenty-hour single player campaign that develops your hero from rags to riches. So the “Symphonic Composer” mindset of taking your time to cleverly develop your motifs in unique ways over longer periods of time may be completely ineffective (depending on the style, game play, demographic, etc.).

While “Legend” (the Novel) is rich with detail and must take its time to dramatically crescendo, “Cities of Legend” (the Social Game) is meant to hastily throw the player in the world and have them immediately grasp almost everything that’s going on. Even if the player is unfamiliar with the world, within the first minute of playing they should understand the following: Pick a side to fight for, understand the function of the UI, and realize how to jump into battle. So as the Composer, we initially have about a minute to help reinforce or describe the tone of the faction they chose to fight for. After that amount of time, the player will most likely jump into a battle.

So we have a minute, what can we say in that amount of time?

Early on we decided that each faction (Republic vs Rebels) should have their own designated theme, instrumentation, and overall tone. I had read “Legend” before working on the score, but meeting with the Producer and Author was very helpful. For the sake of organization, I’ll provide a visual breakdown of how I determined which various musical elements I assigned to each faction. 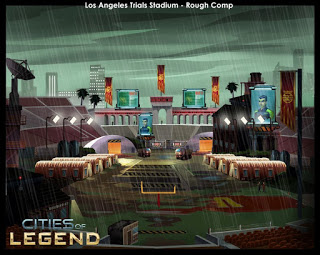 III. Work your Themes into Trailers or Promo Videos

I mentioned in the previous section that developing your motifs over the course of a game may not be the best option (or even possible) in some scenarios. However, if you’re able to negotiate and work on the Trailers/Promo Videos (and have time to Compose the necessary themes before the trailers are released) this is a good place to do it.

Rather than just writing stereotypical trailer music that would just serve to move the action along, I was able to sneak in bits and pieces of each theme (Rebel & Republic) in our various Trailers. Furthermore, I was able to “stamp” the ending logo with the Rebel motif, which just so happened to align with the overall tone of the first novel (and thus served well as a “Main motif”). I found that this was not only musically satisfying, but helped establish the world of “Legend.” This is especially effective since you won’t hear those themes (or probably that same combination of sounds/instruments together) anywhere else.

I thoroughly enjoyed my time working on the “Cities of Legend” and would highly recommend both the game and novel to anyone interested in near future dystopias with strong characters. Thanks for reading fellow Game Composers and I hope you’ve found this useful!