Mixing as part of the music composing process, Part 1

By Kole Hicks**In this article I refer to Mixing as if it includes all aspects of track production before mastering.

Mixing is typically considered by the majority of people as the thing you do to “sweeten” the music after it has been written and recorded. Furthermore, the “Mixing” definition tends to only refer to what we think of as “modern mixing” with balancing volume levels, EQ, Ducking, etc. via a Pro Tools (or other) session.

However as I see it, what we think of as modern “Mixing” existed before the time of computers or electronics and has been well known by many of the greatest musical minds throughout history. It is certain that these composers cared deeply for the way their music would be heard by others and I bet that a large majority of them would be right there in the mixing booth tweaking knobs if they had the tech available to them. In fact, many composers wrote very detailed notes on the score about how each instrument should be performed (Tone/EQ), where it’s physical location to everyone else is (Panning), etc. In this article, I would like to challenge the notion and will supply arguments against the idea that Mixing & Composing have to be two separate processes.

*I always have the “philosophy” that if it ends up influencing the way the music will sound, then it’s important enough to think of while I’m composing the piece.

The role and importance of a mixing engineer has become ever more apparent in newer styles of music (Pop, Electronica, Hip-Hop, etc.) where the professional is not only “fixing” up the vocal/instrumental parts and placing them in their appropriate “pockets,” but adding unique filters, FX, EQs, etc. that directly influence the arrangement and are absolutely essential to the composition. It is my belief that these engineers don’t get nearly the credit they deserve… listen to anything in the Top 40 on the radio and I can guarantee you’ll hear how important Production is to many of those songs.

Also, if you’ve ever attended a Composer’s convention/conference of some kind, then it’s not a secret that many of the musicians there hold the belief that they should never mix their own music and that it is better left to a professional. While this can be true in some situations (Ex: Orchestral Music that is supposed to sound as “Classic” as possible) and I always advocate the use of or collaboration with other professionals, there are fantastic benefits of not only mixing your own music, but becoming aware of all the mixing tools available at your disposal.

So what happens when we no longer use Equalizers, Compressors, etc. in the way they were “intended,” but instead think of and use them as creative tools? Something that you’re not aware of and thinking about after the music has been recorded, but BEFORE… My main intention with this article is to help you become aware of this possibility and guide you through one of my examples. There are way to many available directions you can go in with this new approach (and I’m sure many of you are already starting to generate ideas), so I’d just like to show you an example of one of my projects.

(All of the following has been written BEFORE composing a single note.)

To introduce this project, it would probably be best to start by explaining the overall goal of the music. As a specific challenge for myself to come up with new and creative stylistic combinations (which I recommend every Composer do as often as possible), I asked the question…

If I were playing a fictitious/high-fantasy game as the great explorer “Marco Polo” while he wondered through the borderlands of Mongolia/Northern China on a foggy night… what would that sound like?

The use of certain “ethnic” instruments indigenous to these areas would be an obvious choice for the instrumentation of the piece, but we must remember that Marco Polo has yet to visit these areas and wouldn’t really know what any of those instruments would look or sound like. Furthermore, (adding to the tension) we’re not only in a foreign (possibly hostile) land, but it is a foggy night with only the moon’s light enhancing the lack of true visibility. There are a million different directions you can go in and none of them are necessarily “good or bad,” merely different and more effective depending on the situation and audience. I’ll explain some of my choices below…

Let’s say in this game that the developers feel it is important to aurally depict each character, place, and the time in history. However, they also would like to keep the score rather modern so that people can still connect to it (nothing overly abstract). In the “scene” described in the question above, it has been decided that the following should be included in the piece of music: Marco Polo’s Origins/Theme, The Foreign Lands (Mongolia/Northern China), and the Fear/Tension/Excitement of being an explorer in a new land on a foggy night.

I’m a huge fan of Mongolian Folk Music (part of the reason I created this challenge) and more specifically throat/overtone singing. Also, one of my good friends is from China and she brought back a Hulusi (flute) for me that I’ve always wanted to use. Along with the overtone vocals and Hulusi (representing the foreign lands), I’ll use a Taiko drum to control the momentum/pulse of the piece. Furthermore, I need to introduce Marco Polo to the piece. To represent him, I’ll use a string section and nylon string guitar. The specific way I will be using them aren’t exactly “historically accurate” to the time Marco Polo was around, but sound familiar to the player and can easily be used to give a sense of “Home” rather than Italy specifically (especially to most Westerners… assuming this is the main demographic of the game).

Now that we have our instrumentation chosen for this “zone/scene,” we have to think of how we can bring in the Fear/Tension/Excitement… this is when “Pre-Meditated Mixing” is useful. To further enhance the “creepy” atmosphere (and add to the “unknown” sound quality of the instruments used in the foreign lands), I’ll place an EQ on the overtone vocals so that I cut most (if not all) of the fundamental and instead focus on the overtone. Furthermore, I’ll add massive delay to the Hulusi part and change the panning at random intervals (not drastic enough to draw the players attention away from the game… just enhance the unpredictability of the piece/zone). The Taiko’s part will develop over time and the volume/panning would be interactive based off the player’s proximity to danger (something we could control via Wwise/FMOD if the Taiko part was it’s own separate layer).

As mentioned above, chances are high that we’re dealing with a western audience and while you can get away with a lot aurally when there is a picture in front of someone, its wise to know when you’re writing bizarre because something calls for it rather than “out for out’s sake.” With that in mind, I’ll keep the harmony intact and this will NOT be an atonal piece. It will be tonal, although with it’s slightly “out” instrumentation, mixing, and other elements the piece will still sound “foreign” without actually being completely foreign to the gamer. 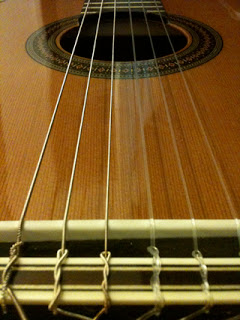 The guitar will play a consistent “pulse” of tones and fade in/out while gradually panning around the “aural environment.” The string section will act as the “western foundation,” establishing something more traditional that the listener’s ear can cling on to while concurrently representing Marco Polo himself. While there will only be 1 underlying harmonic progression, the progression (in it’s entirety) will be developed over time. Because this is purely an example (and not exactly a cue from an actual game) I will attempt to move through different game states within a few minutes. However, if this music was to be absolutely interactive, then each section would be a few minutes long, comprised of multiple layers, and fade in/out from one another depending on the player’s predicament.

All of this I have thought of before I’ve even written a note down and while it may not be practical in every situation, I recommend you try something like this at least once (if only to learn that it doesn’t work with your writing process). It would be cruel for me to list off everything, show pictures, and not provide you with a link to what I created… so click on this link to listen to the piece.

This article continues in Part 2

Make sure to read through Part 2 of this article RIGHT HERE to find out what changes the piece went through and why certain decisions were made. Thanks for reading and keep composing fellow artists!