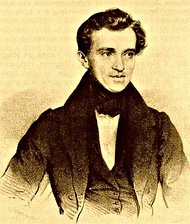 The name of Johann Strauss, senior, is forever linked with waltzes. He was the father to other famous musicians, including Johann (junior), Josef, and Eduard.

Strauss originally began working as a bookbinder’s apprentice, taking private lessons in violin and viola on the side. When his apprenticeship completed, Strauss found a position in a local orchestra. Some time later he departed to join the well-known Lanner Quartet.

The quartet was successful, and swelled to become an orchestra that played a mix of Viennese waltzes and German dances. He rose to become deputy director of the orchestra, and then led a second orchestra when the group expanded again.

Strauss decided to create his own orchestra, a group which would be handed down through his family until 1901. He wrote his own pieces, mostly dances, which became much admired throughout Europe. He introduced the quadrille to Austria, and evolved the waltz into what would be termed the Viennese Waltz.

His talent was outshone by his sons, however Strauss senior’s influence upon classical music remains strong, particular in his development of the waltz form, as well as his practice of disseminating the sheet music of his pieces.