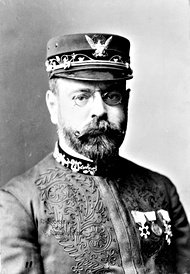 John Philip Sousa was an American composer whose rousing marches left a deep impact on the United States. His works have become standards of American military and political institutions.

Known as The March King, Sousa grew up in a family immersed with military music. His father belonged to a US Marine Crop Band. He passed his skills as a trombonist to his son, along with voice, violin, flute, piano, and cornet. The father eventually recruited a 13-year-old Sousa into the Marine Band.

In addition to military music, Sousa spent a decade playing violin in theatres. He also composed orchestral music, as well as operettas. After being discharged the Marines, he toured and conducted for years.

A return to Washington, D.C. led to an appointment to the Marine Corp Band. It was during this time that he composed his most notable works. He resigned from the Corp and turned his success into a tour, where he was warmly received from royal families worldwide. He continued conducting for the remainder of life, until he died in 1932.

He is also known for founding the publishing society ASCAP, as well as inventing the Sousaphone, an instrument still used in marching bands today.