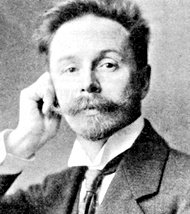 Alexander Scriabin was a Russian composer who pursued writing with an unusual approach. He wrote without key signatures, wrote compositions of light instead of music, and contributed pieces with strange harmonies and textures.

Scriabin's career began more conventionally. He learned piano as a child, and later enrolled at the Moscow Conservatory. He became a skilled pianist, which led to international tours. During this time, he began composing. His writing showed deep respect for Chopin, however later pieces broadened into orchestral works. He was respected, and gained a post at the Conservatory, and toured more.

It was after this time that Scriabin began to embrace spirituality. The beliefs began to have a profound affect on his work. He integrated his belief in God with mysticism. This unusual combination, as well a sensitivity to synesthesia, appeared in his work via strangely-structured chords, harmonies. His performances began to include colour and light, often without music at all. His work continued to evolve in this manner until he died in 1915. Too strange to be fully appreciated after his death, his work has gained some popularity in recent years.