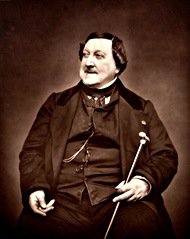 Gioacchino Rossini’s musical education was diverse. He family was naturally talented with music: his father directed a band and played trumpet, and his mother was a singer. Rossini learned his first lessons from his parents, then followed with a variety of private instructors.

He eventually enrolled in the Conservatorio of Bologna, but found himself resisting formal structures, an inclination that was have a strong affect on his later work.

At 18, he produced his first opera, La cambiale di matrimonio, and followed with others, each receiving more success. Tancredi, in particular, brought international recognition. In Italy, he became a national star. Rossini continued composing, accepting commissions from theatres.

In 1816 he completed The Barber of Seville to immense acclaim. He moved to throughout Europe, ending in Paris, while continually produced operas for large sums. William Tell was written then, and marked a shift in his style. He altered the conventional opera to fit his needs: his work was bright and lively, and featured writing which rose from soft passages to stormy, powerful heights.

The popularity of Rossini’s work not only entranced the public, but changed the genre of opera forever.