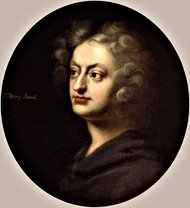 Henry Purcell was an English organist. His crowning accomplishment was weaving the harmonic highlights of French and Italian music into English church and folk forms to produce an entirely new Baroque style. He achieved this daunting technical feat while gracing his compositions with enchanting melodies, harmonies, and a thoughtful arrangement of the English language.

Purcell was born into a musical family. His father was a choirmaster at Westminster Abbey. Purcell became a choirboy himself, learning chorus as well as keyboards at that time. At 14, he was appointed assistant to the royal instrument keeper, and rose to become a court composer for violin pieces.

Even in his teens he became known for his skill as a keyboardist. This earned him the post of organist at Westminster Abbey, a role that he retained to his death. His skill grew, and was later recognized with an appointment to the Chapel Royal.

Purcell wrote prolifically. While he focused mostly choral church music, his works also included odes, operas, and theatre music. He was at home with any style. His pieces were popular in diverse circles, and created a lasting impression on English music that remained unchallenged until Elgar’s work, almost 200 years later.