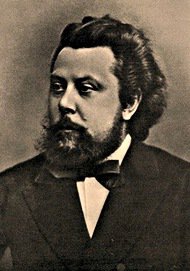 Composer Modest Mussorgsky never became deeply involved in Russian music. He wrote only part time. He did not compose many pieces. He died without affecting contemporary composers. However, Mussorgsky works were remarkable for their bold, raw writing. His goal was to invent a distinct Russian, nationalistic style, which he achieved, all while ignoring conventional techniques and practices.

His musical education came from his mother, who taught him piano. His main pursuit was a military career. However, while he prepared, he sang in a choir and had his first experience with Russian church music. This left a permanent mark upon his creativity.

After graduation, Mussorgsky joined the Russian Imperial Guard, and continued learning music and composing on the side. He eventually abandoned his military career and turned to composing full-time while managing his family’s estate. When the estate collapsed he was forced to accept menial work. Throughout this time he continued to write using a novel approach: he invested musical Realism into his works, and this brought favor from his peers.

His greatest works came afterwards, however alcoholism ruined him, and he died in 1881, penniless and mentally ill.

Notable works:
A Night on Bald Mountain
Pictures at an Exhibition