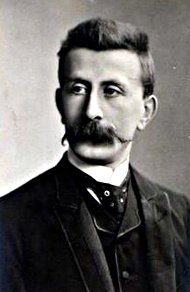 The composer Moritz Moszkowski had the reputation as an accomplished pianist, a brilliant teacher, and, overall a gentleman. He was widely respected by his peers.

Born in Poland, Moszkowski learned piano in Dresden, starting at age 11. He later studied in Berlin, and afterwards at the Kullak Academy. This focused training brought Moszkowski to the public for his first performance as a pianist at 19. Even before that Moszkowski was employed as an instructor at only 17, and remained in the position for some time.

A poor constitution drove him from the stage, and he focused on writing. His compositions modeled themselves on Spanish music, and these works became quite popular with the public. He did, however, explore other methods of composition, including etudes, waltzes, and piano pieces. Eventually his oeuvre came to include an opera, a ballet, and a mix of concertos. Overall, his work was marked for its popularity and technical prowess.

Moszkowski moved to Paris, however his popularity lapsed as music tastes shifted. A series of bad investments left him broke, and remained in poverty until he died in 1925.