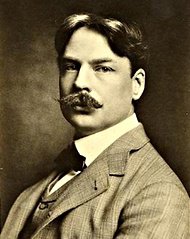 Edward MacDowell December 18, 1860 – January 23, 1908 American composer Edward MacDowell was born in New York City. His first exposure to music began with piano lessons from a violinist staying with the family, Juan Buitrago. MacDowell was later introduced to concert celebrity Teresa Carreno, who continued his studies. Since serious music instruction was only offered in Europe, MacDowell and his mother moved to Paris, and studied at the Conservatoire there. He continued learning in various locations across Germany, supporting himself by teaching lessons. He met Liszt, and with his encouragement, began composing. MacDowell returned to Boston, where he achieved the height of his popularity, fame, and fortune. He composed prolifically then. Much later he was employed as the head of the music department at Columbia University, a position which lasted until a new dean slashed the music department and sidelined MacDowell. MacDowell's health declined, and he died in 1908. MacDowell's major contributions include his piano concertos and suites. While his works are less popular now, he had a strong impact on classical music at the start of the twentieth century. Notable works: Sketches To a Water Lily To a Wild Rose Keltic Sonata Sea Pieces New England Idylls