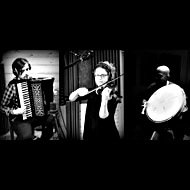 Karolina Matuszkiewicz was born in 1990 in Nowa Ruda, Poland. She is a violinist , vocalist and multi-instrumentalist specialized in traditional string bowed instruments. She graduated from Fryderyk Chopin University of Music in Warsaw in the faculty of violins, and is currently a student of Krakow Music Academy in traditional fiddle faculty. She co-founded the of Karma Trio Band (awarded on many traditional music festivals in Poland). She has also won several awards in violin playing contests, as well as vocal contests.

Patryk Walczak was born in 1988 in Radom, Poland. He graduated Karol Szymanowski Academy of Music in Katowice in the faculty of jazz composition and arrangement. He is the leader of the band "Frument" which has won many awards at the most important accordion and folk music festivals across the country. Walczak has won many composer's competitions as well. Patryk is a teacher in music school, where he shares his experience and passion during workshops with young accordion adepts.

Aleksander Grochocki was born in 1978 and lives in Poland. He is a composer, arranger, producer but above all a guitarist. He started playing at the age of 17. From the young rebel-with-guitar, through jam sessions in jazz clubs of Warsaw where he has grown as a musician, to the studio session guitarist - he plays many styles of electric, acoustic and bass guitar, as well as ukulele. He worked on many video game productions and continuously collaborates with Adam Skorupa.

In the Pat & Olo project Karolina is a lead singer, violin and other string instruments player,  Patryk "Pat" Walczak is the main composer and accordion player and Aleksander "Olo" Grochocki is responsible for production, arrangement, guitars and folk drums.