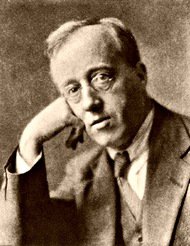 Gustav Holst’s works were characterized by their power, life, and vibrancy, although his later pieces became subdued and sparse. His writing had a profound impact on later English composers.

Holst began his explorations of music with his father, an organist and pianist. He taught Holst violin and trombone, partially in an effort to alleviate the sickly youth’s asthma.

Holst began playing organ at a local church, and began composing as young as the age of 12. He sang, and played trombone and violin in the All Saint’s Church choir and orchestra. He later enrolled in the Royal College of Music, and, upon graduating, found work at the Carl Rosa Opera Company as a coach and rehearsal pianist. He was composing during this time, and the Cotswold Symphony he wrote became a success.

He found work with a number of teaching positions, which left little time to compose. However, shortly after this period he began work on his most famous piece, The Planets, and later the notable Hymn of Jesus.