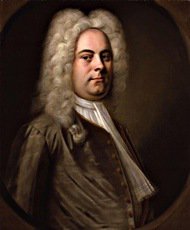 His first studies in music began in Halle. He continued pursuing composition in Hamburg, Italy, and later London, where he settled. Nobility of various stature supported him, including Queen Anne of England.

Handel founded a number of companies to showcase his operatic works. His success was uneven, and Handel eventually abandoned Italian opera completely. Thereafter he shifted to choral works, and found fame with Music for the Royal Fireworks, and The Messiah the following year.

After Handel died in 1759, his operas faded from popularity. His work remained vital, however, and was studied by luminaries such as Mozart and Beethoven. In particular, he is admired for conveying power and emotion though simple methods.