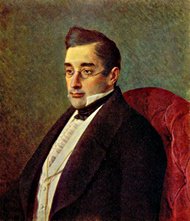 Russian composer Aleksander Griboyedov's career in music was balanced by contributions to other arts: he was also a poet, playwright, and a diplomat.

Griboyedov first studied in Moscow University. Afterwards he held a number of posts before he became the secretary of the Russian legation in Persia. While a diplomat he began writing plays and verse comedy. The socially biting Woe from Wit was a satire on Russian aristocratic society, and was censored.

He wrote two notable waltzes, both for piano: A flat major, and E minor.

He was brutally slaughtered by a furious mob while on assignment in Persia.