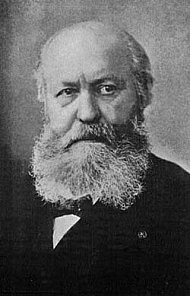 Charles-Francois Gounod was a French composer, organist and conductor. He began studying music with piano instruction from his mother. He later enrolled at the Paris Conservatoire, and achieved the Grand Prix there. He continued studying composition in Rome. There his work shifted to a more religious theme, to the point where he considered a clerical profession. He was a deeply devout man, and this influenced his writing: he produced many masses, and sacred scores.

Shortly after this Gounod shifted to writing symphonies, although they received a lukewarm reception. It was his opera Faust, that, after a slow beginning, granted him national fame. The operas Romeo et Juliette and Mireille followed, and secured his international reputation.

War forced Gounod to relocate to England, where he became a conductor to the Royal Choral Society. His work from this time, vocal and choral pieces, returned to religious themes of his earlier years. He later returned to France, However, Gounod’s works afterwards never achieved the heights of his earlier works.