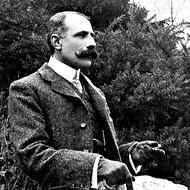 Edward William Elgar grew up surrounded music. His father was a church organist who owned a music shop. He taught the young Elgar some piano, organ, and violin. However, Elgar was largely self-taught. This independent streak led him to support himself with composing, and teaching and playing locally.

He was plagued by self-doubt and only gradual success. His wife, Caroline Alice Roberts, herself a published novelist, was instrumental in supporting and encouraging Elgar. A brief, unsuccessful stay in London forced Elgar to return to Worcester. It was then that he wrote his Enigma Variations, which finally brought him mainstream success. He toured across America, and his First Symphony was played over 100 times in the first year of its release.

He is best known for his work Pomp and Circumstance, however fans of his music favor his deeper works.