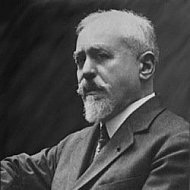 Paul Dukas did not show any particular talent as a child, and it wasn’t until recovering from an illness that he began to compose. It intrigued him, and he enrolled at the Paris Conservatoire at 16. He studied piano, conducting, and orchestration, as well as harmony. His time at school was cut short by a military draft. He would later return to the Conservatoire to teach orchestration over the years.

When he wasn’t teaching, Dukas worked as an inspector of musical education, and as a music critic. He began composing operas at this time, and, while they did not achieve immediate popularity, two of his most popular works were composed then: The Sorcerer's Apprentice and Symphony in C.

He then devoted himself to composing, mostly opera, but also peppering his writing with sonatas and ballets. He was a perfectionist, and destroyed most of his work he felt was substandard. As a result, only a handful of Dukas compositions remain, although they are unanimously praised for their quality.