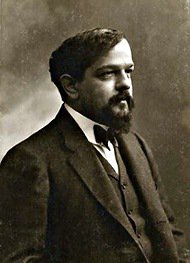 Claude Debussy is one of the most influential composers of his era. His career began slowly, but became one of great significance by the time of his death.

Debussy had a reputation as an impetuous and passionate child. At age 11 he enrolled at the Paris Conservatoire and quickly invited conflict with his teachers. He rejected the expected compositional forms and rules. This was a foreshadowing of the style his music would have in later years.

While at the Conservatoire he met Nadezhda van Meck, a wealthy patroness, who employed him to teach her children. This experience expanded Debussy’s exposure to nobles, and allowed him to perform regularly. It also introduced him to Russian composers, which were to influence his later compositions.

After a brief stay in Rome, Debussy returned to Paris. He continued teach, critique, and compose, but his work was largely ignored. It was only around 1900 when the public and critics began to appreciate his colourful style and passion amongst a lack of typical structure. He became a prominent figure in French music.

Debussy’s work is known for its unconventional use of scales, and for employing influences from medieval and ancient Greek music. It is also famed for its beauty, passion, and emotional expression amongst this technical innovation.