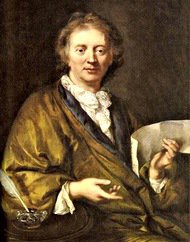 French composer Francois Couperin was an important organist and harpsichordist of the Baroque era.

He came from the musically-inclined Couperin family, a dynasty of talented professional composers and performers. His education began by studying under his father, Charles, and later, Jacques Thomelin. He inherited the post of organist at the church of Saint-Gervais, Paris, from his father. Later Couperin was appointed to the Chapelle Royale by Louis XIV, a post previously held by his mentor, Thomelin.

Couperin began composing works for organ, but later switched to sonatas. He continued writing, gathering many harpsichord pieces. It was during this time that he became intrigued by the Italian style. He began weaving this with the French style, culminating in his work Les nations in 1726, and his suites for bass viols.

Throughout this time he was recognized as harpsichord and organ virtuoso, two instruments he continued to teach until his death in 1733.