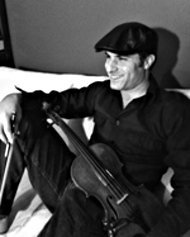 Chris Tedesco is a New York City based songwriter, multi-instrumentalist, producer and arranger. For the past 10 years, he has kept one foot in New York and one in Nashville. He has been an active part of the downtown music scene in New York for 18 years. He is the owner of StringRecordings, a recording studio that specializes in recording all things strings, with Chris' one-man string section being the most popular call. In Nashville, he founded The Ranchhands, a high energy country music band that was a touring machine from 2004 – 2009, performing over 800 concerts in 20 countries, with some interesting credits, including:

* First American country music band to perform in Albania.
* Bandleader Chris Tedesco nominated for international musician of the year in France in 2004 & 2005.
* Song “When Everything Changed” featured on benefit CD “Stomp Out Cancer” to fund cancer research.

As a sideman instrumentalist, Chris has toured & performed with several notable performers including Ann-Margret, Charlie Daniels, The Weepies, The Shirts, Kenny Loggins, Phoebe Snow, Jane Siberry, and many others.