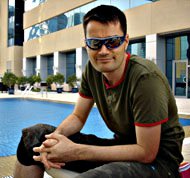 Anthony Neil Putson is a UK based composer and sound designer and has been active in the video game industry since 1994. Anthony has worked on nearly 200 projects in this time, covering many styles and genres of music for some of the biggest developers and publishers worldwide.

Anthony has amassed a huge array of sample libraries from some of the most well respected vendors around which allows him to truly express himself in his music. Anthony's passion for film music in particular, past and present has played a pivotal role throughout his 20 year career, and cites composers such as John Williams, James Horner, Hans Zimmer and Jerry Goldsmith as important influences.