It’s always a bit of fun when you reach little milestones with your business, and we are happy to announce that a couple of days ago, order # 222222 was placed here at Shockwave-Sound.com. That’s since we started our current order database in April of 2005. (We had ‘manual’ order counting from 2000 till 2005). The customer behind the $82.38 order #222222 was ITV Channel Television (UK). We’ve crossed out the customer’s name and email address in the interest of their privacy. Thank you, ITV and all of you great customers who placed the previous 222221 orders! 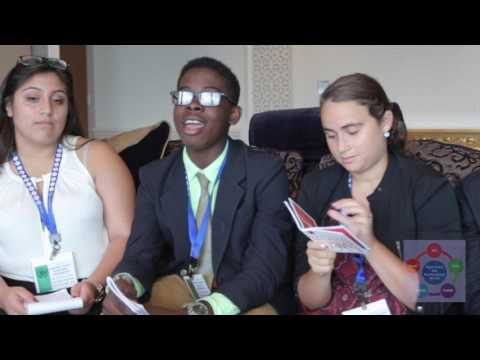 We were contacted by the Manhattan Multicultural Counseling, a United Nations project working with youths and human rights. They asked us to donate a music track free of charge for their video about youths memorizing all 30 United Nations declarations on human rights, and we were happy to work with them.

Here is the video, created by Max Hollander of Maximillian Productions.

The music track playing is our track, “How Beautiful Life“, composed by Ferenc Hegedus.

If you are a registered Non Profit, non political, volunteering organization or charitable project and you can document your charity / non-profit status, we may donate free royalty-free music to your project. We like to support worthy causes. We will always want to learn something about your project first, though. And no political parties. 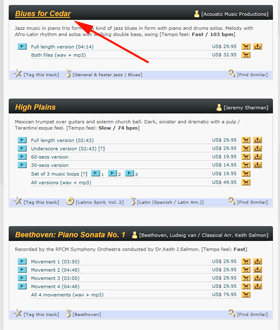 Finding your picked tracks on a different computer

We are occasionally asked how it’s possible to make a list of favorite tracks, and then find that list on a different computer. You may be browsing music from home and wish to make a list of bookmarked tracks that you would like to come back to when you’re in your office, to actually make the purchase from there.

As you may have noticed, our site does not have “user accounts” and does not require that you set up an account, or log into an account, before making a purchase. We have considered this several times, but we feel that a lot of customers like that about our site – that they can just come, browse, place an order. All without having to create a user account first.

However, not having any user accounts, we have no way of tracking a person from their home computer to their work computer. But there is still a way that you can create a list of favorite tracks from home, and then access that list from your work computer, by using Mozilla Firefox web browser.

The Firefox browser has a feature called “Firefox Sync” which lets you create a Sync Account with Firefox, and all your bookmarks, log in information, saved passwords, etc. will be stored within that account. So you can have all your bookmarks and other such information shared between your computers. I’m using that feature myself and it’s really great. If I bookmark a page on my office PC, I can see that bookmark on my laptop when I’m traveling.

If you want to bookmark a specific music track, simply click on the track title. That will take you to a page that specifically displays only that one track. The URL for that page looks something like: www.shockwave-sound.com/track/xxxx (where the x’es represent the track ID number in our catalog). While viewing this page, you can Bookmark the page and easily find this track later. And if you’re using Firefox Sync feature, you can see that bookmark on all your synced computers. So when you start up Firefox on your work computer, you’ll see the track bookmarked there. 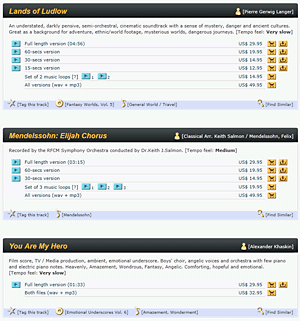 About a month ago we launched our new, powerful music browsing tool. This weekend we are pretty pleased with ourselves again 😉 because we are unveiling our new style track display. The new track design can be seen by browsing or searching any music on our site, and it looks like the picture on the left, with the new black headings for track titles and new-look “play” buttons. We hope you like it! Besides looking a bit cleaner, it is also more optimized and streamlined than the old design, so track display pages should now load a bit faster.

The real improvement here, though, lies in the [Find Similar] link that you can find on the bottom frame of each track displayed. Clicking on this link brings up our powerful Advanced Browse too, pre-filled with details of the track you were looking at – such as: Music genre, tempo-feel, moods/emotions, prominent instruments and suggested production types. From here, you can either tweak the criteria as you wish, or you can simply hit that “Submit” button and a new “Advanced Browse” will take place that looks for tracks with similar configurations as the original track. This should give you a new track listing with a whole set of tracks that should pretty much match up with the track you were looking at first.

Play around with it! We think you’ll like it. If you encounter any problems with it, be sure to let us know. And thanks for using Shockwave-Sound.com! 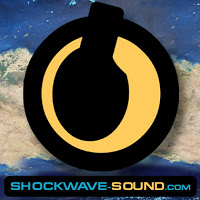 When we first started Shockwave-Sound.com back in April of 2000 (now more than 11 years ago), the site contained basically only a few music tracks by founder/creator Bjorn Lynne, himself a musician with a nose for the emerging royalty-free music market. Everything was run pretty much manually, with Bjorn himself, or his wife, emailing with each customer individually and manually sending them the files they had purchased

In the spring of 2005 the site contained almost 1,000 different tracks, by about 30 different composers with whom Bjorn had made a deal to sell their music through this site. At this time, the software that runs the site “behind the scenes” was totally overhauled and basically created again from scratch. Now the site was given the technology needed to deliver files automatically to customers and to automatically create License Documents for each customer.

It’s now the spring of 2011 and apart from a few minor tweaks and fixes, Shockwave-Sound.com has basically, pretty much run on all the same technology for all these years since 2005. We’ve added a few things to help us along, such as the [My Orders] page where customers go any time to recover old orders and re-download them any time they want. But by now, the site has a catalog of approx. 10,000 tracks, with some 100-200 new tracks being added each new month. We’ve realized that the old search / browse structure is no longer enough, on its own, for customers to make a good and precise music search.

We we’ve gathered a whole team of talented people and we are now working on several upgrades & improvements to the site. These will include:

These are all things that we will be rolling out over the next few weeks and months here at Shockwave-Sound.com, and we hope to have most of our new stuff active on the live website by the end of the summer 2011.

Right now, we have 7 guys working on listening to all 10,000 tracks in detail, one by one, and inputting additional data about each track, including Moods/Emotions, BPM tempo, Tempo-feel, Suggested Production Types, and Major Instruments. In fact, as I write this, it’s almost completed.

We’d like to take this opportunity to thank all our users, visitors, partners and friends up through the years for their interest in our music and for making Shockwave-Sound.com such a successful business. We’re 11 years old, and quite literally, we can’t wait for the next 11!