The Inspiring and Musically Powerful World of DIY Instruments

What is a musical instrument? It is an object that creates sound for the purpose of creating music. The definition of  “music” is a topic for another post, but for our purposes here let’s assume that we all know what music is, or at least have our own interpretation of what constitutes music. Regardless, musical instruments have been a vital part of human culture that dates back to the dawn of human history. There are reports of flutes made from mammoth ivory found in Germany that are dated to be close to 43,000 years old. These early DIY musicians had a different means for securing instruments than we do today: they made the instruments themselves. In contrast, in today’s world, many of us think of musical instruments as products made by a manufacturer in a factory, or meticulously crafted with the highest quality tools and technology in a professional workshop. They are consumer items that we consider products to purchase from music stores or bought used from other musicians. However, we must remember that for the majority of human history, instruments were
handmade, and most likely by the musician themselves.  Below are three impactful instruments assembled by the musicians themselves that create stunning results, ranging from
the simplistic to the complex. 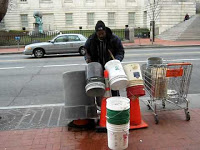 Very likely the first instruments created by man were percussion pieces, as they require little effort to produce. Anything, really, can be used to create a drum. Related to this, my personal favorite DIY instruments are percussive as they can be so simple and yet used to create incredible rhythmic performances live and in the studio. One drumming set up that deserves recognition is the construction-bucket drum sets that are used in cities throughout the world by street musicians. They are used on streets throughout Washington DC in the United States and traditionally have been used by street musicians to play DC “Go-go” beats, a rhythmic music that originated in and is special to that particular city. These drums are made from buckets that originally held paint or plaster and have been tossed from construction sites, coupled with the orange cones used for caution during road repair and construction. Ingeniously, a player mounts two buckets atop the cones by simply draping the metal handles over the top, one on each side for balance, and voila, a drum set. Different sized buckets produce different tones, and often the players use pieces of wood instead of traditional drumsticks in the true DIY spirit. In addition to this set-up, I have also seen “bass drum” accompaniment in which a drummer simply uses an upside down massive plastic trashcan. Generally, shopping carts are used to move the set from location to location. This may seem simple to create, but often the beauty of genius is its simplicity. Furthermore, the beats that the players produce can be top-notch.
This
following video must be included as well, as these Chicago street drummers take
DIY to its most basic level, simple and awesome, one bucket each. Related to
percussion instruments are mallet driven instruments such as the xylophone and
the marimba, glockenspiel, and the vibraphone. A musician named Jake Clark, who
goes under the moniker “Pipe Guy,” creates a similar type of instrument, but
with his own unique flair. And, his mallets are flip-flops. He uses PVC pipe to
build elaborate multilayered instruments, beaten with flip-flops, to produce
dance music, which is astoundingly sonically similar in tone to synth sounds
used in traditional house and techno music. He began on the streets of
Adelaide, South Australia, and has since moved to the stage. He has a presence
on Facebook under the user name pip3guy and seems to be constantly
building new set-ups. His creations are difficult to explain so viewing this
video is the easiest way to understand.
The most
impressive element of Pipe Guy’s instruments is the original way in which he
plays them as dance music instruments. Pipe Guy’s use of PVC pipe is in the
vein of a multitude of DYI instruments such as flutes, xylophones, rain sticks
and more that can be created with PVC pipe. But Pipe Guy personally takes the
material to a higher level of complexity for DIY instrument creators and
carries it into a specific music genre: techno. Now, it must be stated, there
are similar and more massive instruments created by the producers for
professional outfits such as the Blue Man group, easily found on Youtube and
wildly impressive. However, Pipe Guy is one-man-show, a true DIY musician.
Clearly,
Pipe Guy has tuned his instruments to use a minor scale, common in traditional
techno. Essentially, he uses the same physics of sound employed by anyone
creating an instrument from piping, regardless of material. Basically, making music
with pipes occurs through creating pressure waves by beating on one end of the
pipe. The length of the pipe determines the note, as different lengths of pipe
create different wave lengths. Interestingly, the width of the pipe changes the
tone of the sound, but not the note. The thickness of Pipe Guy’s choice of PVC
affords him the deeper tones and most likely his choice of rubbery flip-flops
affords the buzzing electronic sound he is creating. A drumstick would create a
higher faster popping hit, whereas the flip-flops provide a softer punch and
perhaps allow the pipes to reverberate more.
Here is what happens when Pipe Guy’s PVC instrument meets a street
bucket player called “Techno Hobo”:

The third example of DIY musical instruments
requires the high technological know-how and the creator is a PhD and an
associate professor of music at Stanford University, named Mark Applebaum. He
is a renowned composer and has made significant contributions in orchestral,
chamber, operatic, choral, and electro-acoustic music, which has been performed
throughout the world. He states that after learning and mastering different
types of musical instruments he becomes bored, and therefore creates new
instruments. While there are many examples of fresh new instruments, it may be
that Applebaum’s creations take the cake. He specifically states in the below
video that “boredom,” not lack of funds, or the need to build something, is the
catalyst for his creations. In other words, he is inspired by his boredom and
makes incredible creations as a result. He is tired of traditional instruments and
music from the traditional cannon, such as Beethoven and therefore has created in
this instance a musical instrument that is, simply, incredible. This instrument,
called the MOUSEKETEER is demonstrated at 4:42 in this video:
As shown, his fantastic conglomeration of objects
constituting the Mouseketeer includes a massive array of items such as door
stops, combs, whistles, strange pieces of metal, wood, and plastic, bells, as
well as a live bank of electronics that the somehow influences the sounds
emitted. The instrument appears to be a one in all entire orchestral percussion
team. It is more than that, in fact, it produces both musical sounds as well as
sound effects. He can play this with mallets and a bow, and most likely in many
other ways. The mix from the instruments apparently is fed through the
electronic sound bank.

As he states, humorously, he is the “world’s
greatest Mouseketeer player.” Which is true if one considers this interesting
statement. A DIY musician is truly the greatest player of their instrument in
the world as their instrument is unique and they are the unique creators. They
are inventors, as Applebaum calls himself. Musicianship and invention go hand
in hand because what is original music, but a fresh invention of sound. Musicians
and sound designers are inventors. They are designers of material and sound.
Whether simple or complex, all three examples in
this post are impactful, rather through their raw musical power such as the
bucket drums and drummers in the first example, the novelty and originality and
unique presentation/vision of Pipe Guy, or the complex technological design of
Mark Applebaum. All three are DIY, though of course Applebaum’s takes special
engineering and knowledge of electronics. The point is, music can be created in
an infinite multitude of ways for an infinite number of purposes.  Any object, or set of objects, coupled with a
unique vision and the intent and motivation of the inventor/musician will
result in new musical creations.  Surely
in the future we will continue to see people make fascinating new combinations
of materials that create never-before-seen instruments. Only the imagination of
the human mind limits the possibilities, and the human imagination is
unlimited.