Music and sound invite all forms of creativity and invention. Most likely as soon as the hand drum was invented, the mallet took shape. The hand drum gave rise to drums of all shapes and sizes, played with all forms of materials and came to utilize hands as well as legs and feet. It is human nature to invent, to improve upon and to change. One clear area that we have continually worked to evolve are musical instruments and the means by which they are played. This trend continues, though now incorporating digital technology into the tradition of instrument creation and modification, discussed below. 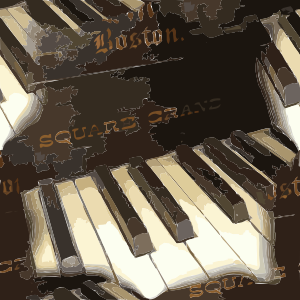 First, a perfect example of instrument modification to enhance performance and expression by incorporating new body gestures occurred with the piano. The addition of three main pedals over time allow a pianist to use their legs and feet to add musical expression. The three include the sustain pedal, the sostenuto pedal and the ulna corda (“soft”) pedal. The sustain pedal, the most right of the pedals, lengthens the time the hammered strings reverberate. When a key is struck on a piano, a hammer hits three tuned strings below and cause them to ring. When the key is let go, the hammer falls onto the string to stop it’s ringing. When the sustain pedal is pressed, a damper bar is lifted that usually dampers the reverberations of all the strings and as a result, a rich sustain (reverberation) follows the played note. 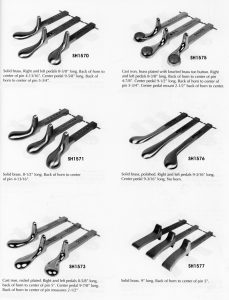 A second pedal is The sostenuto pedal in the middle is similar. However, it only sustains the notes played while the pedal is pressed, but not notes played when released. Using this, pianists can hold bass notes out while played higher melodies over it’s sustain. The third pedal is the ulna corda pedal, also known as the soft pedal. When the una corda pedal is pressed, it shifts the hammer to the right so that only two strings are hit for a particular note instead of the normal three. This results in a softer sound.  The reason I bring this up is because the adaptations to the piano through the addition of these three pedals is an early harbinger of some new technological developments that allow instrumentalists and creators to utilize more body parts to express music, both on a professional level and for kids. So, we bring in …

The MIDI wireless ring: musical gestures with your hands 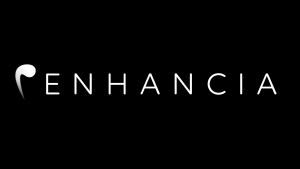 “How a connected ring enhances musical expression and creativity”
– Enhancia

Of all the wearable sound technology discussed in this post, the first is the most formidable in ingenuity and is geared toward trained instrumentalists. French company Enhancia promises to release this revolutionary technology: a MIDI ring to be worn on a player’s index finger that allows a performer to create musical expression through finer than normal movements and hand gestures. According to Enhancia’s press kit, the ring is an evolution of a “musical glove” developed through a collaboration with a French Music conservatory to assist children with disabilities interact with and create music. The glove allowed new realms of musical control, such as playing drums in the air. From this, the developers began to explore how they could release similar technology to musicians that would enhance musical performance. Thus, they decided to create a device that would allow already accomplished musicians push their performance and creativity. Essentially, it opens up an entirely new world of musical and performance possibility. This is reminiscent of the evolution of performance that must have occurred when pedals were introduced to the piano: suddenly dynamics and sustain control were available, expanding control through using legs and feet in addition to one’s arms and hands.

Check out the video below, at 1:30 especially, to witness evolutionary hand gesture controls:

The MIDI connected ring allows a musician to control musical effects, such as vibrato, through predefined hand movements. For example, while playing a keyboard, a musician can add variations to notes with simple hand movements. Wavering one’s hand adds vibrato for instance. This entirely new dimension of physical interaction with the instrument and the produced music creates previously unforeseen possibilities. One would think that incorporating these new movements into physical performance, will also create new ways of playing, new means of playing riffs and finger combinations and different rhythms needed to incorporate the MIDI gestures.

As Enhancia explains, nine integrated sensors and a “real-time gesture recognition algorithm” were utilized to create a motion library specific to keyboards. They have a community of musicians of different styles that provide feedback in order to ensure the MIDI ring is adaptable to diverse musical styles. This ring is accompanied by a hub that can be connected directly to a keyboard or a computer. The signals recorded by the ring’s sensors is sent wirelessly with low latency. Patents have been secured for all of their technology. 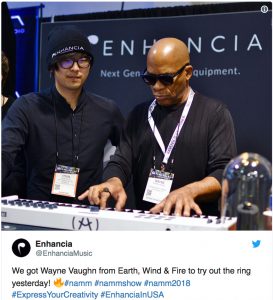 Enhancia plans to launch the first generation of the ring via Kickstarter in March 2018. There is no information yet on pricing, but they aim to deliver product by the end of 2018. The product as recently officially introduced at the Consumer Electronic Show in Las Vegas to favorable reviews. The display version was wired, but wireless function is promised. They have received a CES innovation award in the “Wearable Technologies” category and will also display at the National Association of Music Merchants Show (NAMM) in Anaheim at the end of January 2018.  In sum, the MIDI wireless ring is nothing short of revolutionary by the simple fact that it is allowing entirely new body gestures affect the manipulation and presentation of sound. Simply by waving a hand or finger, without even touching the instrument, the performer can change the expression of the emitted sound. Imagine waving a hand in the air while playing a piano. Would it add vibrato to the note? Of course not. This fact shows how technology has had an continues to have a dramatic impact on musical performance and it will surely continue to do so.

Video, teaser, and press kit can be downloaded via Google drive at the bottom of www.oria.io

Making music with your moves

Daigo Kusunoki is an engineer with a passion for dance. He combined these talents to create BeatMoovz, rubber wristbands that consist of a Bluetooth radio and an accelerometer (an instrument for measuring acceleration). The bands connect to an app of over 400 music and sfx sounds that allow the user to create music through movement. BeatMoovz, now called SoundMoovz, is currently manufactured by trendy toy company Cra-Z-Art and distributed and marketed by Japan-based Dmet Properties. It is operable on iOS 10+ and Android 4.4+.

“The bands pair with a smart device with Bluetooth and the companion application allows users to assign a sound to each band. The app has 40 different music, instrument and robot sounds preinstalled and more than 400 additional sounds are available for free (including karate and more). Setting the sound to a SoundMoovz band is simple and the application allows for different sets to be saved, allowing users to quickly switch between “orchestras”. There is also the “backing track function” that allows users to move to their choice of music from their device and add the sounds from the SoundMoovz as they dance along. https://geekdad.com/2017/08/soundmoovz-wearables/

The wrist bands are smart devices that link via Bluetooth to an application that users can use to assign a different sound to each band. There are 40 different music, instrument and sound effects preinstalled in the app with 400 more available for free. Simplicity apparently reigns with this sound toy with a few clicks of the button and different sets can be saved, as well as the ability to move back and forth between sound banks. Seven SoundMoovz bands can link through one instance of the application, each able to use a distinct sound. This ability allows group performance of seven sound options for one user if they are courageous enough to attempt wearing 7 bands at once. Speakers can be attached to the bands for extra sonic power. SoundMoovz was chosen as a finalist for the 2017 Toy of the Year awards.

And for the Kids: Add some sounds to your day – The Moff Band

The Moff Band is a Wearable Smart Toy that adds sound effects to real life based on the gestures of the wearer. It sonically animates the movements of the user and when used with an app it becomes a larger bank of sound effects. For example, by strumming in the air the wearer can play a guitar sound. Twirling the hand let’s off magical sounds and playing air objects like drums blasts off drum sounds. Thirty sounds are included in the free Moff app that also includes ninja swords, baseball, cooking sounds and more. Moff provides new sound updates weekly through the app. The app plays on Android version 4.4+ and Apple iOS 7.1+. There are parental controls to hide a unwanted sounds. 3 colors of slap bracelets that are Bluetooth-connected allow kids of all ages to have some fun!